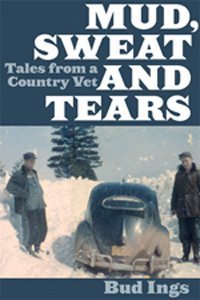 Mud, Sweat and Tears tells the story of Bud Ings’ adventures as a rural veterinarian in the 1950s. As one of Prince Edward Island’s first professionally trained veterinarians, Ings set up his practice in the eastern town of Souris before moving to Montague.

Farms were rarely close at hand, however, and the sight of Bud Ings behind the wheel of his Volkswagen Bug became a familiar one on the Island’s highways and muddy back roads. And whether he was helping to deliver a calf, giving shots of penicillin to a pig, or putting down a beloved horse, Ings treated each animal- and each farmer- with dignity and respect.

Ings’ memoir is a rich, often humorous account of his first decade as a vet, at time when there were few vacations, no modern tools of the trade, and no request too strange to attend to. It’s also the story of a past era, when PEI’s farms flourished and the animals were not only the backbone of the economy, but part of the family.

Vet Behind the Years