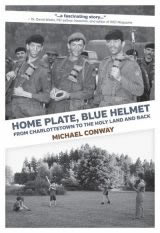 From Charlottetown to the Holy Land and Back

Michael Conway grew up in Charlottetown’s historic north and east ends neighbourhoods full of colourful characters, hard-working families with few luxuries, and close-knit friendships. His stories vividly bring to life the joys and hardships, loyalties and eccentricities, cherished traditions and cultural transformations he experienced intimately there.

After grade ten, Conway left PEI for a career in the Canadian Forces.

We follow Private Conway through the rituals of training — rigorous, comic, and occasionally tragic. He shows us the challenges and rewards of military life for a marriage. We join Conway overseas with Canada’s NATO troops and United Nations’ peacekeeping forces. He often returns, in his mind and on leave, to his beloved neighbourhoods, remembering the Lebanese shopkeepers and J.R.’s famous nite-club where Anne Murray and Stompin’ Tom launched their careers. The “ice palace” where he played hockey and watched local legends. The Catholic Basilica and “bucket o’ blood” school with their larger-than-life priests and teachers. As well, Saturday afternoon sock-hops at the legendary Rollaway Club are revisited. He relives first and long-lasting loves and devastating losses. Conway’s memoir celebrates a community, it’s living history, partly eclipsed by social change, mostly enhanced by heritage movements and a strong sense of tradition and belonging. This is the story of a soldier’s return to his home ground, to his people in their aspirations and camaraderie, struggles and triumphs.

Michael Conway
Michael Conway is an award-winning author whose writing has been acknowledged by the Island Literary Awards. He was born and raised in Charlottetown, PEI and enrolled in the Canadian Army at seventeen, serving throughout Canada as well as postings in Germany, the Middle East and Cyprus. He enjoyed a second career in Charlottetown Police Services Telecommunications Section, retiring in 2013. In May 2016, he completed the courses required for an MA in Island Studies.