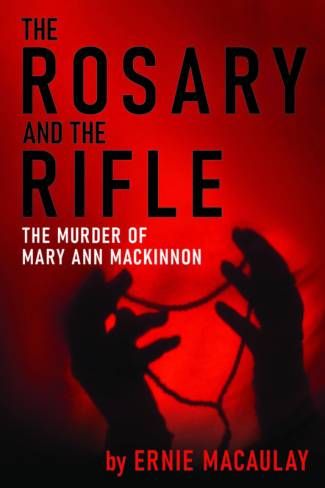 The Rosary and the Rifle

The Murder of Mary Ann MacKinnon

On July 1, 1931, Mary Ann MacAulay married John Charles ‘JC’ MacKinnon at St. Mary’s Church in Souris, PEI. This mother of 12 children was a busy farmer’s wife, known for her optimistic outlook. Her optimism shone through her weekly column in The Charlottetown Patriot entitled “Mrs. Wiggs and Her Garden Patch”. Mrs. Wiggs’ writings not only identify her as an astute observer and chronicler of local events, educational issues, agricultural practices, and economic issues but also that Mary Ann was one of Mother Nature’s admirers and a person inclined to optimism where it could be found.

Mary Ann’s oldest child, Estelle, was 19 years old in 1951. A very attractive young lady, Estelle had graduated from Grade 11. Not long afterward, she was assaulted by an ex-boyfriend, Joey MacDonald, who was about to be tried for attempted rape. Before the trial, Mary Ann and family sat down to say the Rosary. About half way through, they heard glass breaking and first thought it was the chimney of the Aladdin lamp. Immediately when the sound was heard, Mary Ann swayed on her seat and fell backward. Her family members saw blood coming from behind her left ear and they then realized she had been shot. Mary Ann died on the second anniversary of her husband’s death leaving behind eleven orphaned children.

This is the story of the trial of Joey MacDonald and the family Mary Ann left behind.

Ernie MacAulay
Ernie MacAulay was born and raised in St. Catherine’s, PEI and is the grandnephew of the case’s victim, Mary Ann MacKinnon. He has a Bachelor’s of Business Administration from Wilfrid Laurier University, a Master’s in Business Administration from the University of Windsor, and worked in federal policing and commercial crime investigations units for much of his career. As a member of the RCMP, he filled a variety of roles including Officer in Charge of the Vancouver Commercial Crime Section and Officer in Charge of Richmond Detachment. This law enforcement background, combined with dedicated academic research and ancestral history, has formed the basis for Ernie’s insights into the legal issues at the heart of this story. He retired from the RCMP in 2001 and currently lives in Charlottetown with his wife Ruth.

The Rosary and the Rifle
Ernie MacAulay's   books