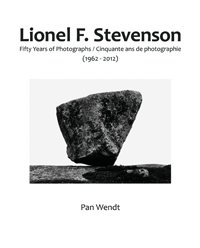 A companion to an exhibit at the Confederation Centre Art Gallery

This survey of work by distinguished Canadian photographer, Lionel F. Stevenson, elaborates on the exhibition Lionel F. Stevenson: Fifty Years of Photographs (1962-2012), and illustrates Stevenson’s long fascination with documentary and artistic works ranging from the poetic, personal landscapes, to street scenes, and architectural subjects. Also illustrated are portraits, including selections from his acclaimed series Elders of Prince Edward Island. The book features an essay on Stevenson’s career by Pan Wendt.

Pan Wendt grew up in Prince Edward Island, where he is now curator at the Confederation Centre Art Gallery. He received his M.A. in art history from Williams College, and is a PhD candidate at Yale University. He has contributed writing to numerous art publications, including Funkaesthetics (Justine M. Barnicke Gallery, University of Toronto); A Modern World (Yale University Press); and Oh, Canada! (Massachusetts Museum of Contemporary Art).