Here for the Music

Laurie Brinklow’s long-awaited first collection of poems beaches the reader on the shores of contemporary womanhood. Strewn with memories of the tumultuous journey through childhood to adulthood and the detritus of relationships chanced and abandoned, finally being “here” brings to devotion to daughters and friends and an Island place. Brinklow’s book contains the tidal pull of loss and renewal, departure and arrival that keeps a lover of islands so close to the edges of life and death.That’s the here. But what she is “here” for is both more magical and more pragmatic: the music. It’s the music of language and the dance of human relationships, the sex and love melodies that bewilder and beguile. Brinklow brings this music down to us where we live, with the earthy touch of the “angel-in-charge-of-things-as-they-really-are.”

Laurie Brinklow
Laurie Brinklow founded Acorn Press in 1993 and was its longtime publisher. She sold it in 2010 to pursue her PhD in Geography and Environmental Studies at the University of Tasmania. Her PhD research explores people’s attachment to islands by examining “islandness” in Tasmanian and Newfoundland artistic expression. Laurie moved out to northern British Columbia with her family when she was five. They spent the next decade traipsing all over BC, Ontario, and points in between, following her construction-worker dad. After graduating from high school in Prince George, she lived in Victoria, she ended up on Prince Edward Island quite by accident, but when she got off the ferry, she said, “This is home.” Laurie’s poems have been published in various journals in Canada and Tasmania and in the chapbook Scars in the Saturday Morning Chapbook series. They have also been broadcast on CBC Radio.

Here for the Music 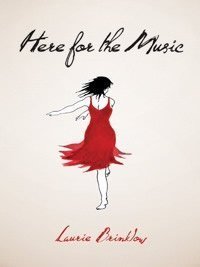