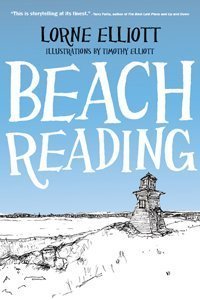 Lorne Elliott’s new novel, Beach Reading, takes us back to the early 1970s on the North Shore of Prince Edward Island, where a hilarious and colourful cast of Lorne Elliott characters are engaged in uproarious political, financial, musical, amorous, and ecological shenanigans. Our young hero, Christian, is an eloquently wry and precocious university drop-out, who has never savoured the wonders of women or alcohol. A budding naturalist raised in central Canada, he arrives on PEI for a summer job in the newly-established Barrisway National Park, and sets up camp on the beach. There, he becomes enmeshed in the struggles of the boisterous MacAkrin siblings to remain in their park-enclosed home, rivalries and lustful longings at park headquarters, and the skullduggeries of an Island political campaign. Lorne Elliott gloriously conjures the mischief and zaniness, the lovable rascals and lamentable rogues, of Island life behind the tourist posters. He deftly evokes the kindness and camaraderie of Islanders, and the Island’s high-spirited revelry. Beach Reading transforms the Land of Anne and Avonlea into the land of Wallace MacAkrin, the Barley Boys, and Barrisway. “Come play on our Island,” as the tourist slogan says, and you’ll be laughing with bittersweet delight for days.

Lorne Elliott
Canadian born LORNE ELLIOTT has performed from Newfoundland to New York City, from Los Angeles to Australia and points in between. Lorne started performing in 1974 as a folk musician in East Coast Canada. At the same time he kept writing fiction as well as songs, monologues and one-liners. The outcome of such a training is a very special show of comedy and music, totally original, entertaining, foolish and uplifting. Along with his unique performance style it is the timelessness of his material, joined with keen observations on today's trends that make LORNE ELLIOTT 's work so special.