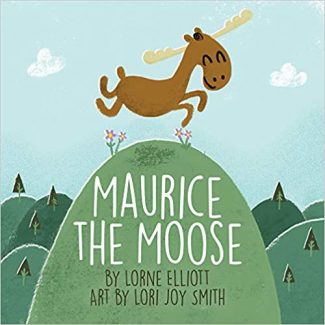 Maurice the Moose is lonely. So lonely, in fact, that when one day, he is attracted to the call of what he thinks is another moose. He runs far and wide to respond to the call only to find that instead of another friendly moose, it is the call of a moose hunter that has attracted him. Luckily, another moose has answered the call and scares away the hunter. And, most importantly, the Maurice makes a new friend. Maurice the Moose is about making friends in unlikely circumstances as well as the strong bond that is formed when thrown together.

Lorne Elliott has performed from Newfoundland to New York City, from Los Angeles to Australia and points in between. Lorne started performing in 1974 as a folk musician in East Coast Canada. At the same time he kept writing fiction as well as songs, monologues and one-liners. The outcome of such a training is a very special show of comedy and music, totally original, entertaining, foolish and uplifting. Along with his unique performance style it is the timelessness of his material, joined with keen observations on today’s trends that make Lorne Elliott’s work so special. He is the author of Beach Reading and a novella The Fixer Upper. This is his first picture book.

Lori Joy Smith
LORI JOY SMITH is a PEI artist and illustrator. My Canada was inspired by her original map of PEI, which has been sold as a print and postcard in shops across PEI since 2014. As a young girl Lori Joy Smith's weekly trips to the children's library with her father sparked her love of reading and children's books. As a teenager she lived in Italy and visited some of the most beautiful museums in Europe, which left her wanting nothing more than to make art. Now she gets to put these two loves together everyday working as an artist and illustrator. She lives in Belfast, PEI with her husband, 2 girls, 3 cats, 2 bunnies, 1 dog, 2 sheep and 3 chickens. She loves making art, walking in the forest, watching the stars, drinking coffee, growing flowers and most of all reading to her own girls every night before they go to sleep. Visit her website at lorijoysmith.com