I am an Islander

No man is a Prince Edward Island. That’s a good thing, because the tiny province is eroding a metre per year.  In the collection I am An Islander, Patrick Ledwell explores the hilarity of life viewed from the country’s crumbling Eastern edge. Raised in a big family, the Island comedian looks back at his rural roots and asks: I am an Islander is a funny and heartfelt stockpile of standup, sketches, and rants, banked up to defend your good humour against everything that might erode it.

Patrick Ledwell
Raised on PEI, and then returned to it, Patrick Ledwell draws on his experiences growing up in an Island family and the funny trials of staying true to his roots. He successfully delayed entering the workplace with degrees in literature and technology. After six years of teaching college, he had build up enough casual days (and e-mail nights) to supply material for a comedy career.  Patrick's smart, quick-witted comedy has brought him national recognition with multiple appearances on CBC Radio’s “The Debaters.” He has performed at the East Coast Music Awards and the Halifax Comedy Festival. His comic monologues have been a regular CBC Radio feature, all across the country. Patrick has co-created several original stage shows. He hosted and wrote all comedy material for the hit Charlottetown Festival show, “Come All Ye.” He also appeared with poet and musician Tanya Davis in two productions of “The New Potato-Time Review.”  He lives in Charlottetown P.E.I. with his wife Tara. This is his first book. 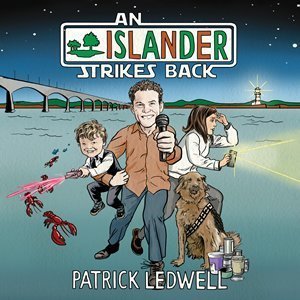 I am an Islander
Patrick Ledwell's   books