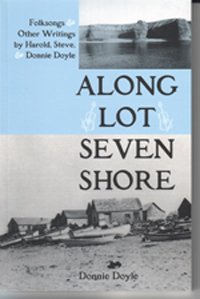 Often, folksongs are left to stand alone, with no record as to the events, visions and principles that inspired them. Rarely do we get a glimpse of the poet’s view of the community and people he or she writes about. However, Donnie Doyle, in wanting to give something back to his community, has done just that. Along Lot Seven Shore is a fascinating combination of memoir, anecdote, narrative song and poetry, created by someone who has experienced that which he has written. In so doing, he shares glimpses of a way of life that makes and defines “community”; this particular community happens to be along Lot Seven Shore of Prince Edward Island (named so when the Island was divided into 67 lots and given in a Land Lottery to the English King’s patrons in 1767), but it could be anywhere in rural Canada.