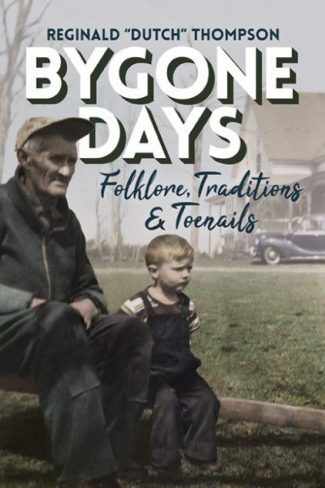 Reginald—better known as “Dutch”—Thompson is a multi-faceted storyteller with unforgettable voices—those of Roy from Murray Harbour North, Adelaide from Bunbury, Gus from Chepstow, and countless others—to tell the stories of the Bygone days in Prince Edward Island [sometimes NS, too]. Stories that, without Dutch’s talent and care, might be remembered only by family and close friends or lost altogether.

Remember when the train ran from tip to tip and along all the small branches, taking goods, people, and baseball teams to other parts of the Island? How about when ice cream and two pieces of cakes cost 10 cents at White’s Ice Cream Parlour on Kent Street? When lobster was not the gourmet’s delight it is now and the backs were used to fertilize the crops? That butchering the pig before a full moon will mean less fat on the meat? Or that it was bad luck to cut your nails on Sundays.

From CBC Radio to the pages of this book, you’ll hear Dutch’s voice encouraging these informative, illuminating, poignant, and hilarious stories from the minds and hearts of Maritimers born between 1895 and 1925, almost as if they were all still here and telling them to you.

Reginald “Dutch” Thompson
Reginald “Dutch” Thompson has worked in film theatre television and radio but his true love is collecting stories and memories from the bygone days in the Maritimes. His 900 recorded hours of oral history and folklore led to a 27 year and counting column on CBC radio and numerous heritage awards. He lives in a 170 year old house in Bunbury, Prince Edward Island.